Many facts about Julian Assange and WikiLeaks were distorted, omitted, made up, or amounted to smearing, during the organization’s numerous releases campaigns, and in the legal cases their founder was involved in over the years.
Recently, various outlets published private photographic and video materials from inside the embassy, sneaky peaks at Assange’s life inside which ought to be denounced as cruel voyeurism, not news.
Indeed, M.D. Sondra S. Crosby, the doctor who examined Assange several times during his political asylum in the embassy stated, in a letter to  the United Nations High Commissioner for Human Rights, that «the synergestic and cumulative severity of the pain and suffering inflicted on Mr. Assange—both physical and psychological—is in violation of the 1984 Convention Against Torture, Article 1 and Article 16. ». She believes « the psychological, physical, and social sequelae will be long lasting and severe ». Doctor Sean Love, who also examined Assange, concurs. He wrote last year that « Assange’s detention continues to cause a precipitous deterioration in his overall condition and amounts to cruel, inhuman, and degrading treatment». The First in-depth assessments of the psychological and physical effects that the severely restrictive conditions of confinement within the Embassy have had on Assange date back from 2015. So yes, watching pale prisoner Assange skateboard after hours, trying to stay fit inside the walls of his arbitrary detention is cruel voyeurism, it is not newsworthy at all. Worse even, it comes in the context of a criminal extortion scheme, where possessors of the materials tried to extort millions from Assange. This was revealed in a press conference by WikiLeaks and is the subject of a police investigation in Spain.
Not only did Julian Assange suffer greatly from confinement and intense stress during his political asylum, his privacy inside the embassy was not respected. His alone time, as well as visits and interviews with friends, family, and even lawyers and doctors, were spied upon and recorded.
This privacy breach – and following that breach, the publication of private materials by media – appears to be the continuation by other means of the abuse of an already vulnerable and weakened person, a political refugee what’s more, and a serious matter. Not only a matter of privacy, also a matter of « attorney-client confidentiality, a matter of journalistic freedom and protection of sources », as noted by the UN Special Rapporteur on Privacy, who is investigating the case and visited Assange in Belmarsh prison.
As for the « arbitrary detention » of Julian Assange, it is also a matter that was investigated by the UN, may we recall once more, it is not a figure of speech. It is the opinion of the UN Working Group on Arbitrary Detention that Julian Assange’s years inside the embassy were indeed years of arbitrary detention, as they carefully deliberated in 2015-16 :
«The Working Group considered that Mr. Assange has been subjected to different forms of deprivation of liberty: initial detention in Wandsworth prison which was followed by house arrest and his confinement at the Ecuadorian Embassy. Having concluded that there was a continuous deprivation of liberty, the Working Group also found that the detention was arbitrary because he was held in isolation during the first stage of detention and because of the lack of diligence by the Swedish Prosecutor in its investigations, which resulted in the lengthy detention of Mr. Assange. The Working Group found that this detention is in violation of Articles 9 and 10 of the Universal Declaration of Human Rights and Articles 7, 9(1), 9(3), 9(4), 10 and 14 of the International Covenant on Civil and Political Rights, and falls within category III as defined in its Methods of Work. »7
In passing, we note that the observed «Lack of diligence by the Swedish Prosecutor in its investigations, which resulted in the lengthy detention of Mr. Assange» has not been much reported on since Julian Assange exerted his right to political asylum at the Ecuadorian embassy. One could argue such “lack of diligence” did not serve well any of the parties involved, neither the women nor Assange, but the states involved, who cared more about neutralizing Assange than they did about justice. For clarification and reflection about the alleged rape and molestation case involving Assange and two women in Sweden in 2010, there are good reads, such as the works of Stefania Maurizi, John Pilger, and more recently Jim Kavanagh
Now Julian Assange’s fear of a sealed indictment in the USA and of an extradition request from the US has been confirmed, in the hours after he was handed over by Lenin Moreno’s Ecuador to the UK Metropolitan Police that gloomy morning of April 2019. He faces years in a maximum security jail, unfair trial, further cruel treatments, or death.
It is urgent to fight for his rights, his life, and with him and WikiLeaks for the freedom of the press. Ultimately, for the rights of everyone to live in a hospitable world, where compassion, altruism, courage are key, knowledge circulates in the hands of the people, powers are held in check, and history is no more a story written only by the “winners”.
Because that is what Julian Assange and WikiLeaks stand for, what their work has done, enabled, inspired, what we should be grateful for and fight to protect.
UK and everyone must resist !
NO US EXTRADITION FOR ASSANGE, EVER, FROM ANYWHERE
JULIAN ASSANGE MUST BE PROTECTED AND GET THE CARE HE NEEDS
https://defend.wikileaks.org/
Much strength and continued courage to Julian Assange
Stay strong !
We are standing with you 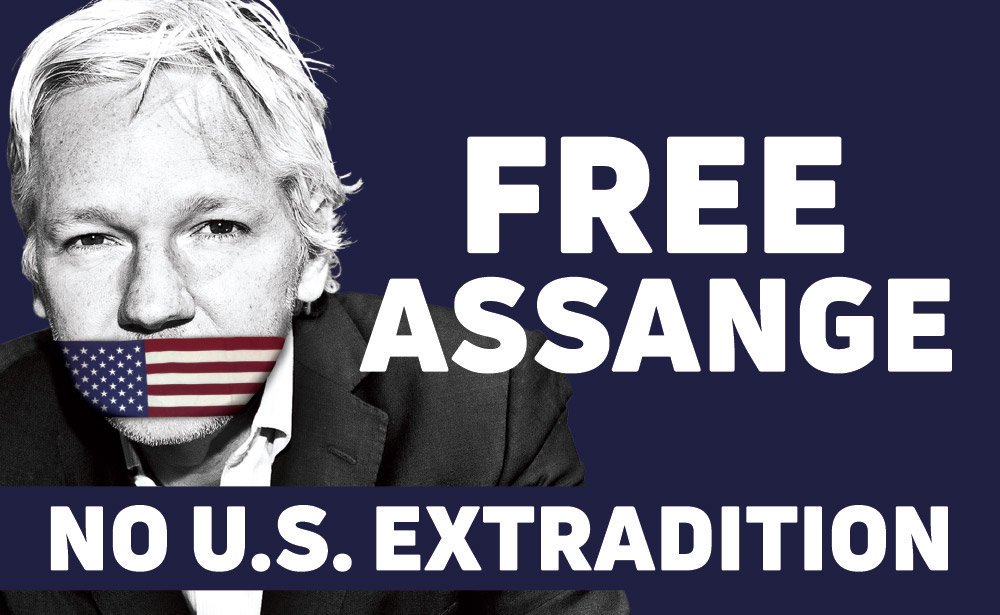