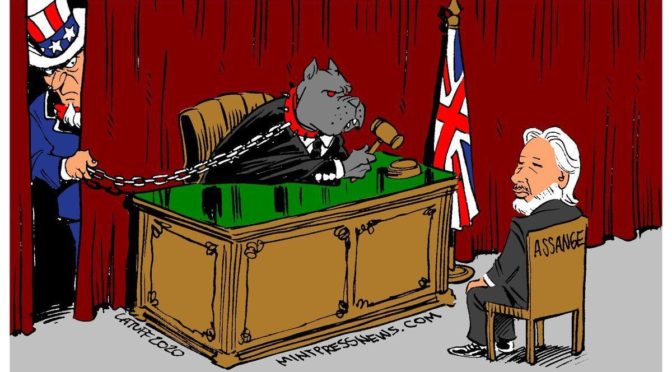 What a start of the year.

After weeks and two rounds of hearing extradition, on monday 4th 2020, district judge Vanessa Baraister rendered the verdict that Julian Assange cannot be extradited to the USA… while setting a disastrous precedent endangering press freedom worldwide!

The reason invoked not to extradite Assange is that it would be unjust and oppressive to extradite him by reason of his medical condition, especially his mental condition, with a high risk of suicide should he be sent to the hell of US detention system and their Special Administrative Measures aka SAM…

Theses reasons are similar to the ones invoked in Lauri Love‘s case, which saved him from being extradited to the USA and probably saved his life too. In the case of USA vs Assange, the medical reasons were among other reasons to reject the requested extradition advanced by his defence team. Indeed, there are other very valid reasons not to extradite Assange, such as the political offence exception, blatant abuses of process in his case… as one will recall reading the defence closing submissions.

Yet Vanessa Baraister shockingly chose to dismiss them all, thus basically endorsing all of US Government toxic narratives, their preposterous and dangerous accusations against Julian Assange, his work as a journalist and WikiLeaks. This verdict is a bit as if she were saying: “I would have extradited Mr Assange to the USA so he could be prosecuted there for espionage – an unprecedented attack on journalism but hey, no problem – but unfortunately he is too weak and your prisons are actually way worse than ours, so he stays here, sorry”

Does this mean that any other journalist revealing US war crimes now or in the future, in the UK, who is healthy, not completely destroyed by years of arbitrary detention and torture, would be a good candidate for extradition and prosecution in the USA? Is that what this means? UK, you must resist harder.

So whilst we celebrate this important first step towards freedom for Assange because it is a move in the right direction, one that can save his life, we insist that he has yet to be freed, from jail, and hope that bail will be granted wednesday, and from then on freed from all prosecution. The USA must drop the charges! Sadly for now, the US prosecution intends to appeal… so, much remains to be done.

Indeed we see that this verdict has yet to transform into a victory for the freedom of the press, because at present the door is still wide open to the utter destruction of our rights to know, to speak, to choose a future. The precedent about censoring press freedom, and further disclosure of confidential information of public interest seems set already… Come on people, come on UK, put an end to this abomination!

Last but not least, we are immensely grateful to all who have been working relentlessly for years for justice, for our rights, for Assange’s life and his freedom. Every step, every stand, every shout counted. This is not over so let’s keep on keeping on, although to eat, drink and be merry is certainly a bit in order now too so we all refill our hopes and courage 🙂

To UN rapporteur on torture Nils Melzer, to the witnesses who gave their statements in court, to Sondra Crosby and all doctors who have been caring for Assange, who documented the abuse, who consistently rang the alarm and helped build the last barrier that may very well save his life, to all supporters worldwide: THANK YOU <3

Julian Assange is not the only one in jail, persecuted or killed for telling truth to power, today in the so called west and across the world.

This fight is a fight for all.

May 2021 be the year where justice prevails and persecuted, threatened, imprisoned truth-tellers, whistleblowers, journalists, activists, political prisoners, are freed.