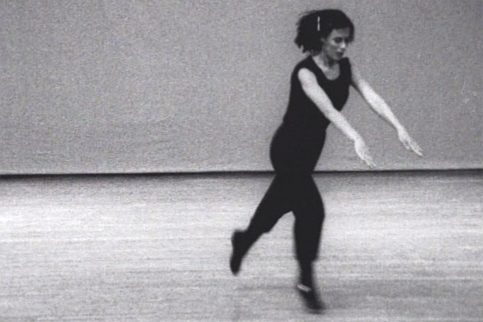 “[Trio A] would be about a kind of pacing where a pose is never struck. No sooner had the body arrived at the desired position than it would go immediately into the next move, not through momentum but through a very prosaic going on. And there would be different moves-getting down on the floor, getting up. There would be this pedestrian dynamic that would suffuse and connect the whole thing. So the whole thing, though it would be composed of these fragments of movement unrelated both kinetically and positionally or shapewise, would look as though it were one long phrase. There would be no dramatic changes like leaps. There was a kind of folky step that had a rhythm to it and I worked a long time to get the syncopation out of it. In a way the opening da, da, da, da of the arms set the rhythm of the whole thing. There were exceptions to this rule, but this began to be the overall structure rhythmically and dynamically of this solo.”