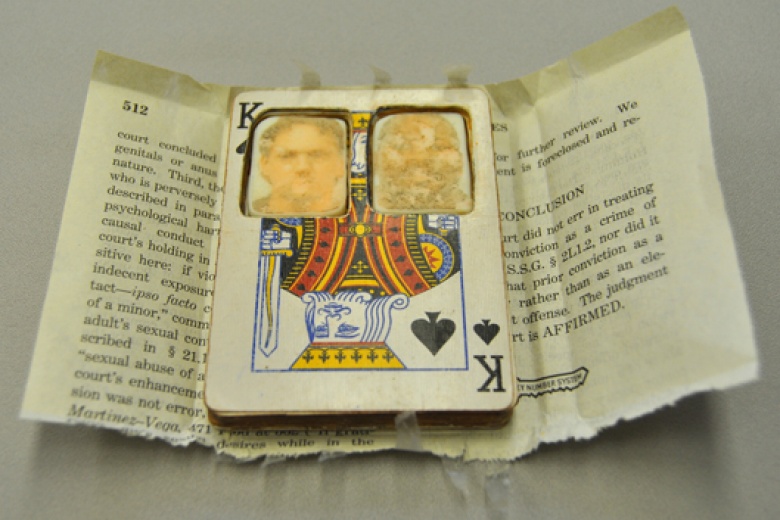 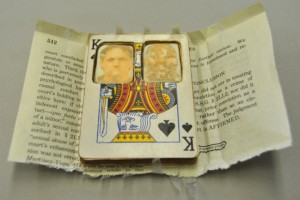 On his work and prison :  “Incarceration marked a moment of personal crisis for me, providing an encounter with difference and generating desire and fear, enlightenment and profound disquiet. Being confined to a cell and mediated existence, all measure within prison seems to collapse, leaving only time to reflect. This reflection was the catalyst for significant shifts in my thinking that ultimately facilitated my body of work. The work I created in prison references the tradition of topographical reliquary, which links an object’s meaning to the sacred importance of its originating place. Interpreted through Robert Smithson’s concept of the non-site, the sheets, soaps, and playing cards correspond to Hegel’s non-being and therefore effectively represent anti-reliquaries or reliquaries from Hell. My temporary effacement from the world resulted in a limbo state between being and non-being, where my only interaction with the outside world was mediated and therefore virtual. Ironically, left with only myself, my life-long questions of self-worth and identity were finally answered. I am an artist. This sense of self fortified my identity and through my art I “escaped” prison.

Apokaluptein:16389067
My large-scale project, Apokaluptein:16389067 was conceived and executed within federal prison. The title references the Greek origin of the word apocalypse meaning to ‘uncover, reveal;’ an event involving destruction or damage on a catastrophic scale; the numbers reference my Federal Bureau of Prisons identification number. My process involved smuggling contraband works through the Federal Bureau of Prisons and the United States Postal Service, piece by piece, over a period of six years, resulting in a forced Exquisite Corpse with myself. Apokaluptein:16389067 is a series of 39 disembodied prison sheets sutured together, making up a collective installation of dimensions as vast as the history and timeline represented over my seventy-month absence. I used hair gel as a transfer medium and a plastic spoon hand-press to transfer images I collected from The New York Times. The fragmented images, removed from narrative sources are inverted and effaced from their supports. I then blended the images together through hand-drawn extensions in color pencil. The interior of the prison revealed, its skin defaced and simultaneously veiled with the transferred images of the daily reality it denies.

Purgatory
Purgatory is a series of 300 carved prison-issued soaps confined within used prison playing cards. Using a hand-printing technique, I transferred the New York Times portrait heads onto wet soap fragments, leaving inverse traces of the appropriated image. I began interpreting these “offender” portraits or decapitated heads as “ink-scaffolds,” the printed counterpart of the Foucauldian scaffold. I concealed the resulting soaps within used decks of playing cards. I sharpened the interior connector of a AAA battery on the cement floor of my prison cell as a tool to cut window-like structures into each card which were then adhered together using toothpaste and soap shavings to form containers to conceal the printed soaps. The playing card containers with altered suits and face cards expand the boundaries of chance to form new poetic constellations outside the systematic rules of the game.