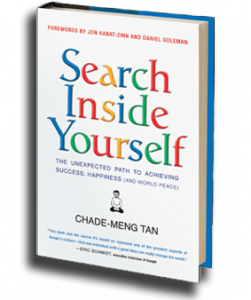 Google has mindfulness meditation courses for its employees (so do/did the military and Monsanto). The program, called Search Inside Yourself, focuses on attention training, self-discovery, self-mastery, and the creation of useful mental habits. The objectives are personal, inter and trans-personal, which include better efficiency, resiliency, innovation, vision, peace & like in the workplace and of course in business, and ultimately… World peace ?

Never-mind if meanwhile outside of Google, San Francisco residents rather suffer from the “growth”, and – while in the Silicon Valley – never-mind “the mindfulness, happiness, and well being of the people mining coltan in the DRC, or the people assembling iPhones at the infamous Foxconn sweatshops“ (in what some call Buddha Abuses).

The head of the program, Chade Meng Tan, portrayed in this Guardian article, has these words : “Also if you treat everybody with kindness, they’ll like you even if they don’t really know why. And if they like you, they want to help you succeed. So it’s good for your soul and it’s good for your career.”

No doubt the skills can come in handy for a variety of individuals and groups with a variety of agendas and understanding of the word “kindness” (does it also sound like some PSYOP art of deception ?).

Chade Meng Tan compiled his teachings in a book, so that the outside world wouldn’t be left out. It is called Search Inside Yourself: The Unexpected Path to Achieving Success, Happiness (and World Peace)

Eric Schmidt, executive chairman of Google, says about the book :

In 2011, Eric Schmidt met with Julian Assange, Wikileaks’ founder and editor in chief, to discuss the “New Digital Age”, which would later become a book written by Schmidt (the transcript of their meeting is here). When the book was published, Julian Assange gave his opinion about it in the New York Times in June 2013, in an article very well titled The Banality of “Don’t be Evil”.

Soon, a new book by Julian Assange will be out : When Google met Wikileaks, about the encounter, and in which Assange will expose his understanding of “Google’s culture”and his vision of the future of the Internet. The publisher OR Books says the book will include his proposal for “a radical overhaul of the naming structure of the internet, one which would revolutionise the way information is accessed”

In the meantime, for an overview / reminder of what else “mindful” Google is up to, check the related timeline on the TerminatorStudies news archive. Nothing to relax about.

If mindfulness training fails at reducing anxiety, depression, and treating PTSD amongst the Marines, they will still have the possibility to consult with Ellie, “an avatar, a virtual therapist developed at USC with funding from DARPA, the Defense Department’s advanced research center.” Loopy.

Read: Would You Want Therapy From a Computerized Psychologist ? by Megan Garber in The Atlantic.

MDMA ? Not only PTSD might pass in just a few assisted sessions, but who knows, the whole idea of going to war or exerting violence against other life forms could very well pass FOREVER. More about PTSD & MDMA assisted psychotherapy research conducted by MAPShere.