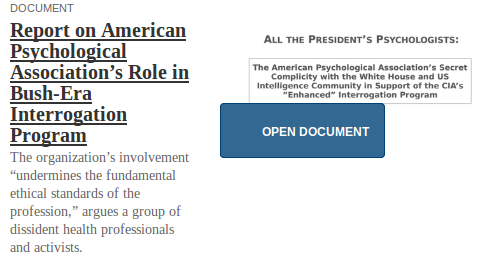 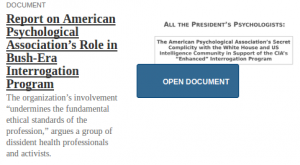 All the president’s psychologists

A new report by a group of dissident health professionals and human rights activists argues that the American Psychological Association secretly collaborated with the administration of President George W. Bush to bolster a legal and ethical justification for the torture of prisoners swept up in the post-Sept. 11 war on terror.

“Matt DeHart is a 30-year-old former US Air National Guard drone team member and alleged WikiLeaks courier, who worked with the hacktivist group Anonymous. After becoming the subject of a national security investigation — and allegations relating to a teenage pornography case which he vehemently denies — he fled from the United States to Canada with his family to seek political asylum and protection under the United Nations Convention Against Torture. In what represents a moral victory for the DeHart family, the Canadian Immigration and Refugee Board judge found that the teenage pornography case against Matt lacked credibility. However, because the IRB considered that the United States still had a functioning democracy, they denied his claim, and on 1 March, 2015 Matt DeHart was handed over into US federal custody.”

>> Information and support for Matt DeHart with COURAGE foundation, who named him their third beneficiary yesterday